The Portland protests are slowing down. There were only a handful this week. One of them was a nice, meaningful rally in honor of George Floyd's birthday, outside Revolution Hall a few evenings ago. There was some "F*ck Abraham Lincoln" sentiment expressed, but by and large the message was positive and hopeful, while acknowledging what an uphill battle racism presents.

The next night, a rowdier crowd went down to the immigration jail in South Waterfront, but apparently only a couple of dozen people showed up, and so the "clashing" with the federales never got started.

Last night, the black-clad dissidents managed to muster a quorum for "direct action" downtown, outside the Justice Center. As best I could piece it together, there were somewhere between 50 and 100 people, including media. Some in the crowd spray-painted their slogans on the police headquarters walls, and then the firebugs ignited wooden pallets, furniture, and garbage in the street. There was a rapper and a small dance party going on nearby. Somebody was cruising around in an electric toy car.

The Portland riot cops came out pretty quickly and blocked the street while the fire department put the biggest of the fires out. 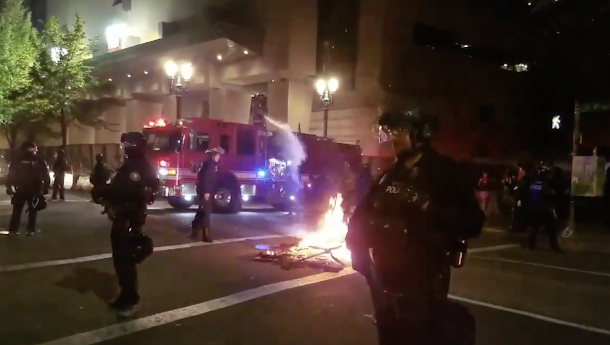 Two people were arrested, and one person was cited. One of them was charged with arson, and a second with reckless burning. The police didn't appear to whack anybody too hard. Their version is here.

By Portland standards, pretty much nothing has happened since the Sunday night rampage in the South Park Blocks. Not to jinx it, but I think we've hit a lull.