Avenue of the giant 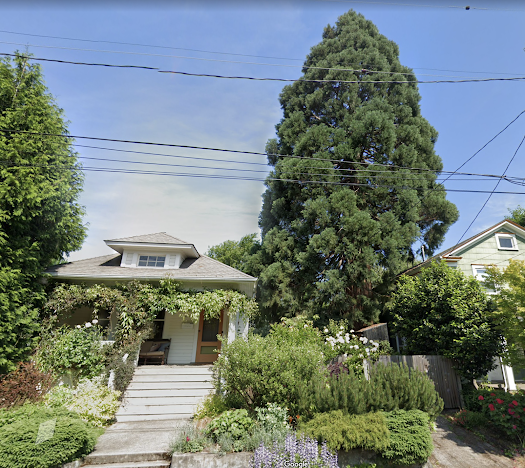 Up the hill from us stands a giant Sequoia tree that's about 100 years old and 100 feet tall. Its trunk is about 10 feet in diameter at its base. It isn't done growing, either. It's probably got another 50 years to go.

The problem is that it's on the property line between two normal-sized residential lots, and it's so close to one of the houses that it's trashed the foundation. That house has been unoccupied for three years; right now, it's up on jacks and its only occupants are the neighborhood raccoons.

The city has declared the tree a "nuisance," and "dangerous," and has ordered it cut down. The neighbor whose house hasn't been hurt by it wants to keep it standing. The neighbor with the damaged foundation wants it gone. Both sides have lawyered up, and of course, the city has lawyers galore.

After several rounds of getting nowhere with the City Hall bureaucrats, the tree-loving neighbor is appealing to the public, and to outgoing city commissioner Amanda Fritz, who's apparently in charge of the matter. Save the sequoia! But who would pay to buy, demolish, or move the other neighbor's house?

Unless a bunch of money appears pretty soon from some source that hasn't been identified yet, that tree is headed for a sawmill. And getting it out of there isn't going to be cheap, either.

A knowledgable reader writes: "Headed for firewood. They’d need a helicopter to get that out of there in sawlog lengths."