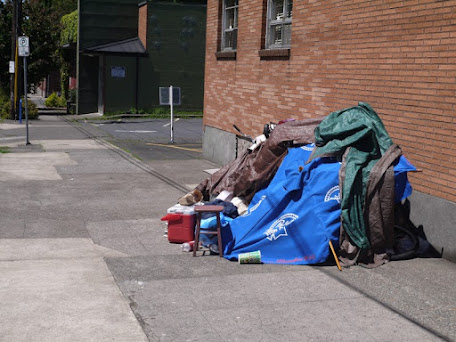 The mayor of Portland, F. Ted Wheeler, and the Multnomah County commission chair, Deborah (the Latest) Kafoury, are suddenly engaged in a public slap fight over Portland's homeless population.

I can't make much sense of it. I thought that when Covid hit, the city and county opened up a bunch of new shelter spaces. Finally, somebody was using the white elephant Convention Center.

But apparently, they didn't do much in that regard. Ted is getting a lot of heat from downtown businesses about how foul the situation is there, and now he thinks not enough is being done to add shelter beds. So he's threatening to break the partnership between the city and the county on addressing the problem.

One thing I do know: There are so many people living in tents on the streets now, it's a disgrace. Thousands of them. It's not just in Portland, but it seems particularly ridiculous here.

The only answers I can think of are politically impossible. In the '80s, we closed the evil "institutions" that used to house the mentally ill. But we didn't replace them with anything. We just started handing out tents. And the "poor farms" went out long ago. Now they're all McMenamins. And speaking of the '80s, once the bonfire of the vanities started, the numbers of destitute people had nowhere to go but up.

And so the latest skirmish about what to do next in Portland doesn't promise to be of much sigificance in the long run. What's most interesting to me about the Ted-vs.-Deborah thing, though, is how outspoken she is in criticizing him. She lets a couple of good ones rip in the Oregonian article:

Kafoury said Tuesday that she’s “not sure what the mayor is talking about.” She said that the joint office has always prioritized solving chronic homelessness and that its efforts to house thousands of families with children, older adults, veterans and people with serious health problems should not be written off, as Wheeler did, as representing “slivers” of the homeless population. Kafoury cited the May voter approval of a new income tax on high earners designed with city input and championed by the Metro regional government expected to raise $250 million annually for 10 years for Portland-area homeless services as an example of progress underway.

“Ted Wheeler knows all of this,” Kafoury said in a statement. “His threat to undo the progress this community has made, and risk services for thousands of people, is merely a desperate attempt to win a contentious reelection campaign.” She described Wheeler pushing for Portland to pull out of the Joint Office as “outrageous” and dismissive....

“I can’t speak for the mayor’s team, but my team at the county is not shy when it comes to demanding the best from the Joint Office,” Kafoury said. “And it’s not so I can look good or win a campaign. It’s because the work literally is about the lives of our most vulnerable community members. This work is for them, not any of us.”