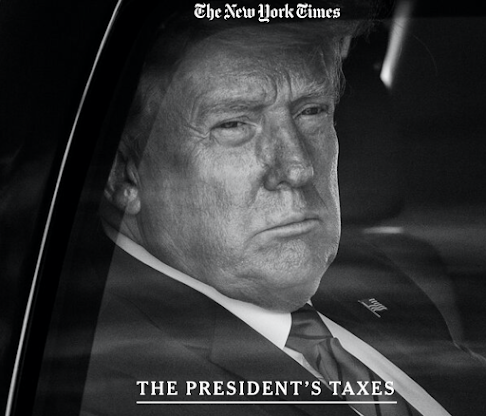 Given what I do for a living, people understandably are asking me what I think of the blockbuster New York Times story about the long-hidden, now revealed, tax returns filed over the years by our president, Orange Caligula. I just took my first spin through the remarkable new article, and here are some initial takeaways:

It's hard to tell exactly what the Times is looking at. They are calling it "tax return data." That indicates that they don't have the actual returns. But the details the reporters are discussing go beyond what would appear in a cursory IRS "transcript" of the taxpayer's records, which might be easier to get. The Times says that its source or sources had "legal access" to what they showed the newspaper folks.

You know that Donnie will be suing people left and right over this. And you know that Bill "Robespierre" Barr will be opening a criminal investigation into the leak, first thing in the morning.

But the questions for Orange Caligula won't be going away. Fake billionaire? Tax fraud artist? Both?