Protesters, feds fax one in

Ah, but Wednesday was a sleepy night on the protest front in Portlandia. The wildfire smoke and eerie skies have given everyone the willies, I think.

A crowd of about 100 went back to the immigration jail in the South Waterfront (SoWhat) District. There were 15 or 20 federal protectors standing out in front of the place. They stared at the protesters. The protesters stared back, and verbally assaulted them for a couple of hours. As far as I can tell, that was it. 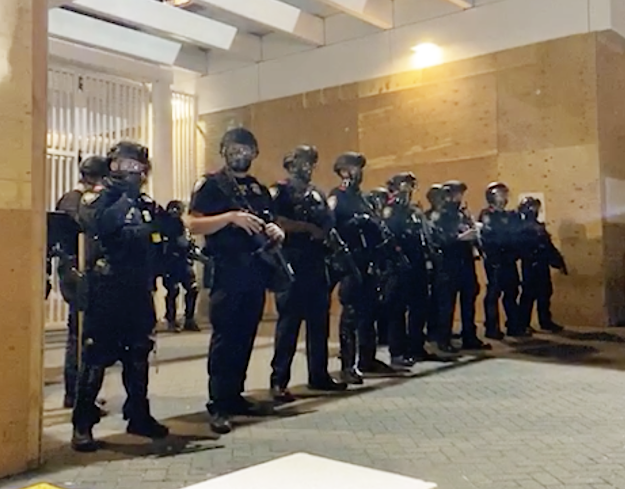 It wasn't that cheap a date, though. There were a couple of dozen more officers, including some of the Trump University ROTC types in the border patrol camouflage outfits, waiting in the wings in the lot on the side of the building. None of them came out to face the music.

I mean that literally. The protesters do play music at these things, and dance around a bit.

And now, they're making movies. They say they've identified the Portland cop who's been slashing people's tires at the protests. On Tuesday night, they were chanting his name in the streets along with the F word. And now, a protester calling himself or herself DJ LRAD (after the Portland cop in the sound truck who bleats out his Orwellian announcements on most nights) has made a movie trailer about the slasher.

It's not safe for work, as to either audio or video, but given how uneventful this post has been, you deserve some entertainment when you can be in the right place to see it:

Funny, yet sad. And definitely NSFW.pic.twitter.com/iUo1WcVX4E