Here's a story that makes me wonder how much longer I will call myself a Portlandian.

Oregon’s Metro regional government district added a wage tax measure to the November 2020 ballot to fund several transportation projects including a new light rail line. This tax joins the proposed 3% income tax being sought by Multnomah County, which comprises much of Metro’s region and the city of Portland, to fund universal preschool.

The Moss Adams accounting firm's summary of the measure also displays an appalling table of the various state and local taxes we deal with here. We don't have a general sales tax, but hoo boy, do they get you coming and going every other way. Here's part of the table. These are just the latest: 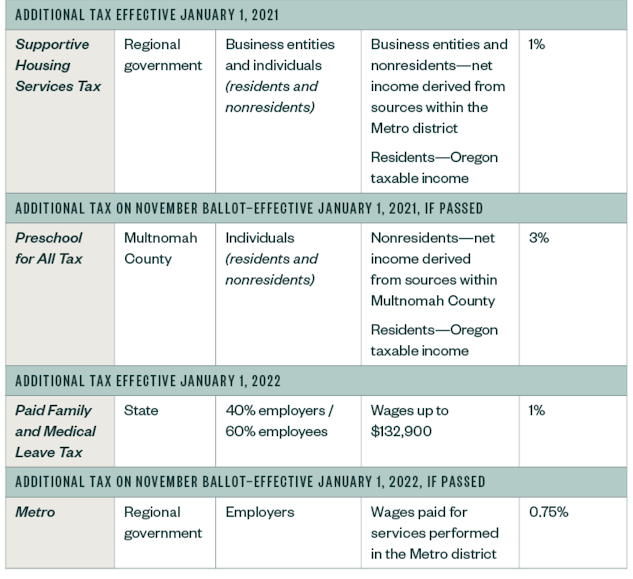 I don't mind paying taxes, but I do mind watching the money go to clowns like Metro and Tri-Met for goofball projects like trains that nobody needs or wants. And I do wonder what the heck Metro is doing in the middle of the homeless crisis all of a sudden. They have no idea what they're doing, but they'll have a ton of dough to play with come next year.

And did anybody notice we are in a pandemic and deep recession, from which it may take a decade to emerge?

I know, I'm preaching to an empty chapel. Have been for years. The voters of Portland will probably pass all of this junk. The young people vote for whatever tax the local politicians ask for. Then they complain that their rent is too high. They don't understand that their landlord just passes the taxes on to them.

Oh, well. Get off of my lawn, dammit!

I hear they have a nice waterfront thing going in the 'Couv these days. Might be worth looking into. As the story says, "If you’re considering a move to another state or another city in Oregon, please contact your Moss Adams professional." Now, there's a timely pitch.