Portland protests back to brutal on Breonna Night 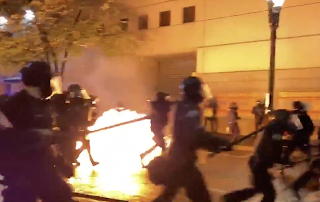 Well, it was all quite predictable. The cops who killed Breonna Taylor aren't going to be prosecuted for killing her, and when the news broke, there was a riot in Portlandia. We will not be out-rioted.
Several hundred people rallied outside the Justice Center to express their displeasure with the grand jury decision. The weather wasn't good, but the rain didn't dampen the anger. Some of the group went around to the back, the Second Avenue side, where the police precinct entrance is. They broke windows and started an awning on fire.
That was the police cue to declare a riot and come roaring out. The local police were joined by federal stormtroopers left over from July's festivities, and reportedly there were state troopers in the mix, too. The feds are heavily into the tear gas and the "less lethal" ammo, and they let the demonstrators have quite a bit of both.
The riot cops pushed everybody far, far away from the Justice Center, but not before engaging in all the worst riot cop behaviors. They slashed tires on some poor bystander's truck, they slashed the tents of homeless people trying to live in the park, and they brutally knocked people to the ground and maced them for no apparent reason other than spite.
Here (in the second video) is officer no. 22 knocking an older guy down, seemingly just for kicks:

Officer 22 is back out and casually shoving protesters from behind. pic.twitter.com/ukjzjJkSkm

Another member of the crowd, who posts video on Twitter and wears "press" garb, was wounded when pushed to the pavment for no apparent reason. Her ankle was injured to the point of requiring a trip to the emergency room.
Eventually the troops "bull rushed" the crowd all the way to I-405, which is a good dozen blocks from the federal courthouse that the federal troops are ostensibly protecting. The creepy unmarked vans are still around. A Twitter type showed one as part of the police caravan that swarmed through downtown most of the evening, and the tweet said it was a Portland police officer, not a federal agent, behind the wheel.
As is standard, once they had the protesters routed to the freeway, the cops turned around and came back to their bases. And so the protesters promptly circled back for another round. Lather, rise, repeat. It went on well past midnight.
In some ways, it seemed like a class reunion. The scene, the players, the weapons – it was like July all over, but with cooler, wetter weather and quite a few people missing.
The police were not alone in the bad behavior department. The protester side had its share of flaming buttheads, too. I mean that literally. As in, Molotov cocktail flaming. The intrepid reporter Sergio Olmos, who deserves a Pulitzer, caught one of them as they chucked a Molotov right into the ranks of the rushing cops. The explosion lit one policeman's feet on fire for a moment (Warning: foul language on audio):

According to the cops, two more such devices were launched at other points in the night.
The official police account is here. As usual, it gilds the lily just a bit, asserting, "Had this incendiary not been stopped immediately, it could have caused serious physical injury to the officer." That's not true. The cop stumbled away, his feet stopped flaming, and he continued on. Fortunately, he was in no further danger. I don't understand why they always have to pad the story. The many videos of the Molotov cocktail will be seen around the world all day and night for a while. They speak for themselves. And what they say is "riot."
Every night it's a contest to see who the bigger jerks are, the Portland cops or the Portland protesters. There are different winners from night to night. Last night, it seemed like a draw.
The police press release says little about arrests, but there were at least a few. I suppose we'll find out more about them later in the morning. My guess is that they snagged people for the usual low-level offenses that won't get prosecuted, and that the fire starters and Molotov throwers got away. That's how it usually goes. We'll see.
Meanwhile, as we brace for Saturday's right-wing confab here in town, we get the hilarious news that Portland City Hall has denied the "patriots" and militia types a permit to use Delta Park. Why? Because they have too many people, and are therefore in violation of state Covid guidelines.
Oh, that'll stop them, I'm sure. It's like when Commissioner Chloe said they were fining the federal government six figures because the courthouse barricade was blocking a bike lane. When it comes to keepin' it weird, nobody outdoes Portland City Hall.
Labels: City of Portland Crime Law National