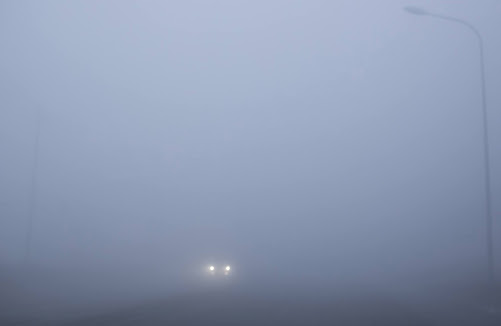 It was another ghost town night in Portland. Certainly nothing to report on the protest front.

The big story is that the smoke in town is still bad. Now there's fog mixing in with it, and the noxious stew is just hanging over us.

I have an air quality app on my phone. It shows green, yellow, orange, red, and when things get really bad, two shades of maroon. Last evening I saw the darker shade of maroon for the first time. And the number 500, which I think means wicked hazardous.

It's unseasonably cool. We're in the low 50s at night, which is about two weeks ahead of schedule. Apparently smoke lets warm air escape from the ground, whereas normal clouds tend to hold it in. I think it's clear above the smoke.

And actual sunlight has not reached us for several days now. The plants in the yard are starting to wonder what the heck is going on.

There's hardly a breeze to be felt, and it's expected to stay that way for a while, and so the smoke will likely be around until it rains. At least what little wind there is, isn't coming from the east, which is where the fires are and where the bad air rolled in from. But there's so much smoke in every direction now that clearing will have to be gradual.

The weather forecast has some rain in it, which would be wonderful. But meteorology in these parts is far from a precise science, so we'll have to wait and see about that. They're saying Tuesday morning. Fingers crossed.

I was out in it a little bit yesterday, and it wasn't too bad, thanks to my trusty coronavirus face mask. I was thinking that if it weren't for the pandemic, I wouldn't have a face mask. So there's a silver lining, sort of.

There are some intriguing political angles to all this, of course. But they're all so utterly sad that I'll have to jot down a couple of notes and come back to them later.

Live in whatever light you can find on this Sunday. If you're praying today, drop in something about the people on the West Coast who have lost so much. Those of us who can say "so far, so good" are lucky indeed.