One of the fascinating facts revealed in the Times piece on Trump's tax returns is the revelation that he received a $70 million federal income tax refund one year. It was because of what we tax types call an "N.O.L. carryback." When you lose money one year, but make a profit in another year, you're allowed to take the negative number from the bad year and use it against the positive income number in the good year. If the good year was a past year, and you paid taxes back then, you get a refund now, right after the bad year ends.
That's what Trump claimed had happened to him. But it's not clear that the deductions that put him in the red for the bad year were legitimate.
Anyway, what's most interesting to me is that when an individual taxpayer claims a refund of more than $2 million, if the IRS is auditing the taxpayer, the IRS is required by law to send a report about it to a congressional committee, the Joint Committee on Taxation, and wait 30 days before paying any refund out. It's been that way since 1928.
The IRS has been criticized for not doing a great job of complying with that law, but according to the Times, it did so in Trump's case. Apparently there were two different reports, one in 2011 and another in 2016, as the audit dragged on and Donnie became a legitimate contender for President.

Records show that the results of an audit of Mr. Trump’s refund were sent to the joint committee in the spring of 2011. An agreement was reached in late 2014, the documents indicate, but the audit resumed and grew to include Mr. Trump’s returns for 2010 through 2013. In the spring of 2016, with Mr. Trump closing in on the Republican nomination, the case was sent back to the committee. It has remained there, unresolved, with the statute of limitations repeatedly pushed forward.

Congress doesn't have many joint committees. A joint committee is one on which both House members and Senators sit. Tax is important enough, complicated enough, and politically charged enough to merit this special attention. There are 10 members, five from the Senate and five from the House.

Now, when the second report of the Trump case was made to the committee, Oregon's own senator, Ron Wyden, was the ranking Democratic Party committee member on the Senate side. Which means that he or his staff probably could have seen what was going on with Trump's taxes. But did they?

House Democrats who have been in hot pursuit of Mr. Trump’s tax returns most likely have no idea that at least some of the records are sitting in a congressional office building. George Yin, a former chief of staff for the joint committee, said that any identifying information about taxpayers under review was tightly held among a handful of staff lawyers and was rarely shared with politicians assigned to the committee.

I admire Yin, and what he says is surely true in the ordinary case. But was it true in Trump's case in 2016? It was a second referral to the committee, which was probably unusual, and it involved a highly visible public figure. Maybe the politicians were allowed to peek.

And if they weren't, then why do we even have the law requiring the report from the IRS to Congress? The committee is supposed to be reviewing the refunds to ensure that they are proper. If the members of the committee aren't seeing what is happening, they're not doing their jobs.

It wouldn't be the first time, of course.

Speaking of Wyden, have you ever heard anything about his tax returns? Ha! Ha! That'd be a big fat no. Gatsby doesn't show those. They would raise way too many questions. And the mainstream media here will never ask. 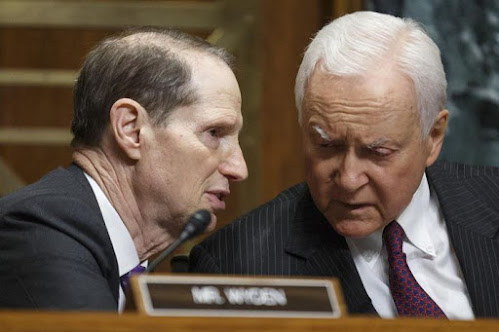