A cure for what ails you 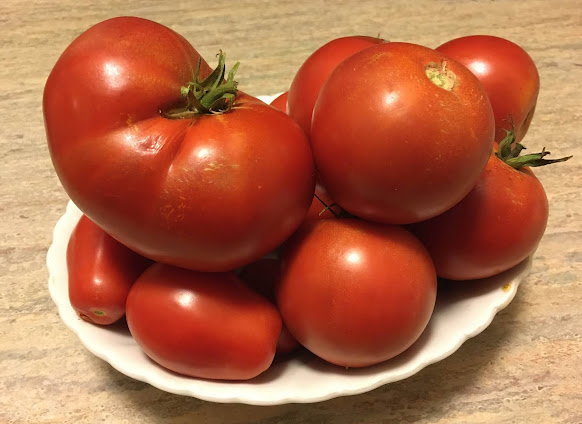 Another summer is officially over for the north half of our blue planet. A summer of trouble and hardship and strife, it most certainly was.

But most of the garden that the Mrs. planted came in. Right now she's harvesting tomatoes. They're late, partly because the wildfire smoke blotted out the sun for a week at a crucial time. But they're here now.

September tomatoes are like no other. They're as far away as you can get from the hard, square, white things that come out of the hothouse in the winter. This time of year, you can really tell that a tomato is fruit, rather than vegetable.

There are many possibilities for eating one, but a couple of times lately I've gone with what might be my favorite: the B.L.T. Yesterday it was on a sourdough toast.

That sandwich never fails to take me back to my childhood. All of a sudden I'm in Newark, 60 years ago, with my grandparents, parents, aunts, and uncles. They all loved a good B.L.T. While they checked to make sure the coal furnaces were ready for the cold nights ahead. Maybe Mickey Mantle and the Yankees were heading to the World Series. Us kids' Buster Brown shoes were still new and shiny. Leave the empty bottle out for the milkman.

The other memory that rushes back with a bite of a B.L.T. is my friend Gersham, who left us a short while ago. When you went out to lunch with Gersh, more likely than not he'd order a B.L.T. At first I thought he was doing it just to get a rise out of people. Gersh was obviously Jewish, and his menu selection sometimes startled his lunch companions if they didn't know him too well. I'm sure he got a kick out of that.

But mostly, he just enjoyed a good B.L.T. for lunch. With an iced coffee.

If the world is weighing you down, as it has been me, find something like this and enjoy it again. Ground yourself. Get in touch with something timeless. If nothing else comes to mind, go get a ripe tomato from a good source and eat it. In a B.L.T., maybe. But if that's not your thing, you can figure out another way to down it. It's hard to screw it up, this time of year. Maybe just cut it in quarters and add a little salt.