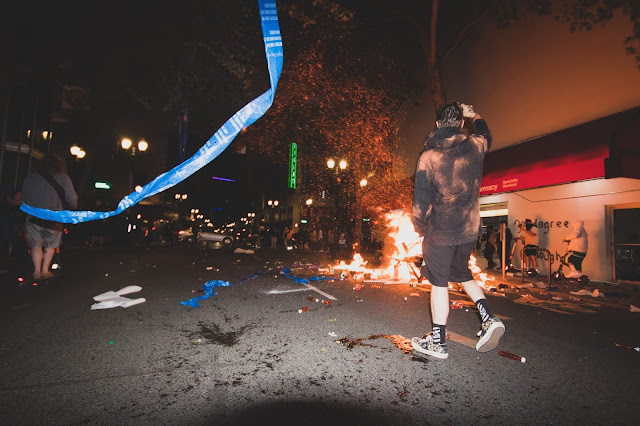 Even the New York Times gets it. Here's an alarming story out of Wisconsin, a state that will probably decide the Presidential election in a couple of months.

In Kenosha County, where the president won by fewer than 250 votes in 2016, those who already supported Mr. Trump said in interviews that the events of the past few days have simply reinforced their conviction that he is the man for the job. But some voters who were less sure of their choice said the chaos in their city and the inability of elected leaders to stop it were currently nudging them toward the Republicans.

The Democrats are finally waking up to this. Yesterday Oregon's governor, Komkast Kate, suddenly piped up with a law-and-orderish tweet.

Let me be clear: It’s time for the violence and vandalism to end so Portland can focus on the important work to be done to achieve real change for racial justice. Those who have committed acts of violence will be held accountable.

I guess someone read her a poll.

But it's gone on for way too long, and neither she nor Portland's mayor, F. Ted Wheeler, has ever quite known what to do about it. The kids are not going to obey. And if the police don't come down harder and smarter than they already have, it will continue to be Groundhog Night every night.

I think the politicians are being played by the cops. As usual. But there's more at stake this time around than ever.