Torching on at Portland protests 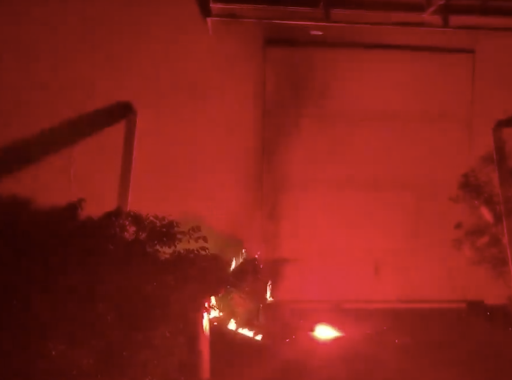 There was plenty more of the usual nonsense at the Portland Protests last night. It went down at the police union office on Lombard. I will spare you the details, because they're all familiar. But here's a highlight reel.

Several fires were set up against the exterior walls of the building, which fortunately didn't catch. The police put the fires out. They cops' nightly charges included the use of tear gas. A hostile guy in a Caddy was driving through the crowd looking for trouble.

To me, the news, if there was any, was the substantial number of arrests: 25. The night before there were 23. Both of those are up from Saturday night's 14.

Few of those arrested seem likely to be prosecuted for the offenses with which they've been charged: interfering with a police officer, resisting arrest, etc. In fact, the rookie county district attorney made the front page of yesterday's New York Times with his policy of not pressing charges that don't include property damage or assault on a person.

So it's basically a catch-and-release game now. But the cops appear eager to play.

There's an interesting civil rights question lurking somewhere in that state of affairs. Should the police be arresting people when there is no chance of their actually being prosecuted for breaking the law? What is the purpose of an arrest if not placing the individual into the criminal justice system? Maybe it's just part of Portland's proud weirdness.

In any event, nobody has been busted for arson, or attempted arson, that I can see.  Or even for vandalism. Some process on the those fronts is long overdue.

But I did stumble across this the other day. The FBI is looking for people who they say were involved in breaking into the Justice Center and setting fires there back at the end of May. The cops have some pretty good photos of the people, and are asking for information. Interesting that the FBI is involved; this is the first I've seen of their participation: 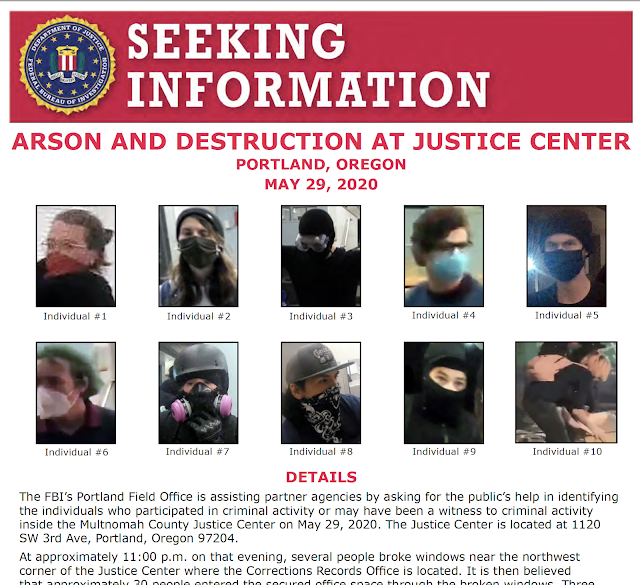 Do you think any of these individuals are responsible for the fires at more recent protests? How many arsonists does Portlandia have?