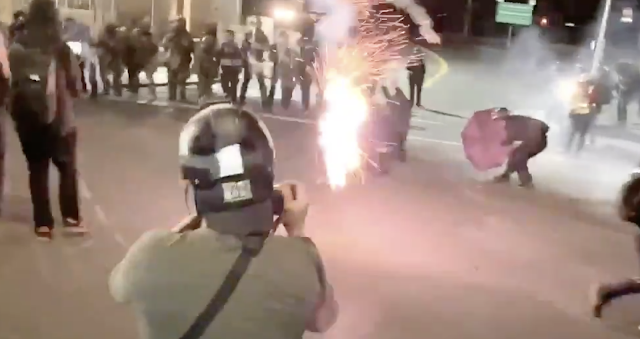 I won't waste too much bandwidth on last night's episode of Portlandia Protestia. But it could count toward a B.S. in Journalism.

The demonstrators (maybe about 100) went back to the South Waterfront immigration jail and did their usual B.S.

The federal troops and the Portland police showed up and did their usual B.S.

It went on for several hours.

Apparently an unhappy guy with a business nearby came out of his shop, accosted the unruly dissidents, and buzzed his Taser at them.

Three protesters were arrested on charges that will probably be dropped. At least one protester was hit with a tear gas grenade and suffered an injury. The official police version is here.

A different group marched around North Portland, including past the police union office, and as best I can tell, nothing much happened there.

Meanwhile, the mayor, F. Ted Wheeler, Tweeted out a reminder that when it comes to fighting racial injustice and police brutality, he's on the case. You can read his 19 talking points here.

But a plan to end the unrest, which is about to enter its fourth month? He doesn't seem to have one. So we continue to get pointless vandalism, arson, police brutality, and danger, punctuated with the occasional serious injury, night after night. One can only imagine how much it is costing taxpayers, not to mention the bad optics it presents on the national political scene.

For a guy running for re-election, Wheeler doesn't seem to be trying too hard. He reminds me of Frank Ivancie. Wheeler's opponent, Sarah Iannarone, would probably be even worse in a situation like this, but one thing for certain is that the mayor is not handling it well. He's probably losing votes every day on both the left and the right.

Oh, well. It's still summer. Have some ice cream.