Score one for people with lives 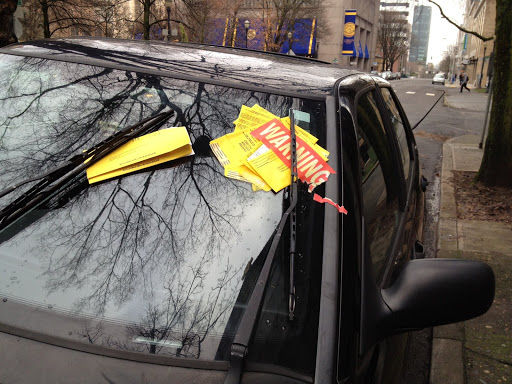 Downtown Portland has a lot of problems these days, but one of the most frustrating is the way the city enforces parking rules. The attitude of the parking meter monitors goes beyond aggressive; they're downright vicious. It's all in keeping with the car-hater attitude that permeates City Hall. If you have an actual life that car ownership helps with, Portland makes no bones about it, it wants you gone.

So you stop driving downtown, just like the city wants. But then, you stop going downtown altogether. Which is not what they want... I think.

Anyway, it was with some pleasure that, acting on a tip from an alert reader, I read this opinion from Friday by the Ninth Circuit federal court of appeals, reinstating a lawsuit brought by a Washington attorney whose car was towed for failure to feed the meter. According to the lawyer, Andrew Grimm, the city was required by the Constitution to do more than slide a tow warning under his windshield wiper shortly before siccing Retriever Towing on him. Grimm, who originally paid for a round of parking using the city's phone app, argues that the city should have notified him on his phone that his car was going to be towed, before they towed it.

As told by the appellate court, the facts were straightforward:

Over the next seven days, Portland officers left on Grimm’s car windshield four citations for parking illegally and two citations for displaying expired registration stickers. On December 21, the day Grimm’s car was towed, the officer issuing Grimm’s sixth and final citation also placed a “separate red tow slip” on Grimm’s windshield. The slip had the word “TOW” on one side and an order to tow the vehicle on the other. The officer then contacted Retriever Towing, which “promptly”— how promptly the record does not disclose — towed Grimm’s car. Grimm learned that his car had been towed when he looked for it on December 24.

A federal trial judge, Michael Mosman, threw Grimm's case out, but the appeals court on Friday overruled the trial judge on the ground that he applied the wrong legal standard. The correct test of the adequacy of the city's notice system was whether it was "reasonably calculated" to give Grimm individualized notice, given that there were four tickets piled up on the car and Grimm apparently hadn't come back to the car to read any of them.

And so the case goes back to Judge Mosman to decide whether the city was reasonable. Given the judge's prior inclination to dismiss Grimm's case, I wouldn't bet money on his chances of succeeding in the end. But it's great to see him standing up to the bullies in city government, and winning at least one round. The bureaucrats' arrogance always deserves pushback.