Rocks off for the riot cops; Antifa meets Pro-fa

The train wreck known as the Portland Protests continued last night at the sheriff's office/police precinct at 47th and East Burnside. It was the usual stuff, only it seems a little worse each time.

A couple of hundred protesters stood in front of the building for a couple of hours. The police DJ From Hell warned them repeatedly to stay off the property. After a while, the kids got bored, and one went and spray-painted graffiti on the boarded-up building. Others in the crowd played with the traffic cones blocking the driveway. Then a group of protesters formed a phalanx of wooden shields, over the line and onto the property. At that point, dozens of Portland riot cops came storming onto the scene, smashing the phalanx and chasing everyone down Burnside Street for many blocks.

Was there anything new to be seen? Two things jumped out at me as I watched some of it on Twitter. First, the cops have been ramping up the violence a little each night. Last night, they were obviously getting their jollies banging the protesters around. The charge into the phalanx was remarkable in its all-out physicality.

The cops started with a big smoke cloud, and then they charged into the shields full-tilt, like the kind of kickoff play that's being banned in football because it causes so much brain damage. Sergio Olmos, a reporter who ought to get some sort of prize for his coverage of these showdowns, caught it on video here. Check it out – scroll to the video labeled "Police jump into protestor shields, then start swinging." Still shots don't really capture it. 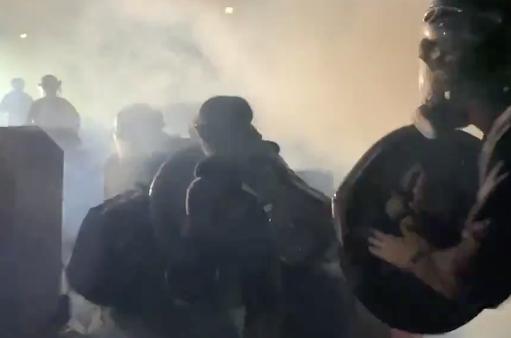 It's hard to imagine that the scene shown in that clip is real, much less happening in little old Portland, Oregon, USA. Here it is from a different angle:
As the police did the "bull rush" out Burnside Street, anybody still holding a shield got knocked on his or her behind. People on the sidewalk did not get much of a break. If you were stuck behind a slow-moving person and a cop caught up to you from the rear, you got pushed or thrown down.
The police were also particularly nasty with their tire-slashing and car-window-smashing. Any vehicle that looked protester-related was hit. There were several. Thousands of dollars in damage was done.
The other notable thing from last night, and yesterday afternoon, was that counter-protesters were in town. Right-wing white men, I'm not sure what their exact cause is supposed to be, but you can figure it out. They were downtown during the day, and a handful of them showed up in a limo at the protest in front of the police facility at night. They stood at the precinct for a short while, just to rile up the main protesters, I guess. And then they drove off.
Elsewhere, video appears to show a different counter-protester being spit on and roughed up pretty severely by protesters, including one with a baseball bat, as the right-wing guy and some cronies left the nighttime scene on foot. You wonder if that kind of thing is going to go unanswered.
There was violence downtown in the afternoon as well – fisticuffs, paint thrown, mace and pepper spray sprayed, between the two factions. Shots were fired, and at least one 9 millimeter shell was picked up. A black SUV driving by the Portland Building let loose some sort of firework or explosive that made a loud noise. As far as I can tell, no one was hurt.
I've been wondering when the tighty-righty guys would show up. Well, they are definitely around now.
A final note: Last night a car crashed into the police union office, site of many a protest. The police say it wasn't political, just an inebriated driver.
Labels: City of Portland Crime Law