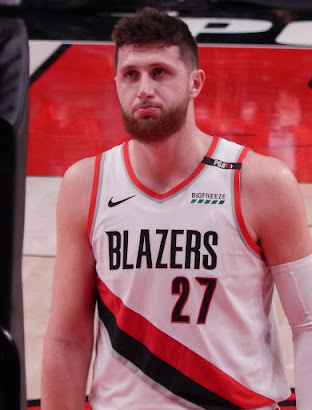 The Blazers' hot streak in the NBA 2020 "bubble" ended with a whimper on Thursday, as the team suffered a 111-to-88 drubbing at the hands of the Lakers. The first-round playoff series is tied at one game apiece; four wins takes it.

The Lakers answered the wake-up call of their Game 1 loss and played some serious defense. They were all over the Blazers' star guard, Damian Lillard, the whole game. For the first time in a long time, Dame didn't look like he owned the place. He had only 18 points.

All of the Blazers' shooting was poor. They wound up hitting 40 percent of their shots from the field by the end of the night, but if you discount garbage time, which was at least one entire quarter, they shot worse than that.

Carmelo Anthony had exactly 2 points. C.J. McCollum had only 13.

Probably the worst thing that happened was that Lillard dislocated a finger on his left hand in a freak accident trying to swipe the ball away from Anthony Davis, who punished the Blazers with 31 points. Lillard left the game and didn't return after playing 30 minutes.

Messed-up hands are a routine thing in basketball. Even I have a knuckle on my left hand that will never be quite right after a pickup game at the Aero Club 40 years ago. Dame Dolla will have to have his finger splinted for a while, which may hamper his usually brilliant shooting.

In other bad news, once again Zach Collins didn't play. And now we learn his season is over. He has a fracture in his ankle. And it wasn't from any particular trauma, apparently. It's a stress fracture, which in the long run is pretty disconcerting. Maybe Zach is just too fragile for the pro game. The curse of the Blazer big men is forever, apparently.

Speaking of Portland big men with injury history, Joe Nurkic didn't have much of a Game 2. Some letdown is to be expected, given all the emotional stuff he's been going through with the death of his grandmother from Covid. But he'd better snap out of it. Without Collins around, Nurk has to carry even more weight than before. And the Lakers have so much big guy muscle to throw at him. Not just Davis but also JaVale McGee and even creaky old Dwight Howard.

Which brings us to Hassan Whiteside, just behind Nurkic on the depth chart. Whiteside is a highly talented shot blocker, and he has some wonderful moments, but he's good, not great, overall. If the Blazers can somehow get him going for a couple of games, that would be a big plus. But if he just faxes in his usual performance for the next few games, this could be the last basketball weekend for Portland.

Wenyen Gabriel, the impressive rookie, is another potential X factor for the Blazers. But he was just okay on Thursday, and he's getting a baptism of fire dealing with the Lakers. Gary Trent Jr. can provide a spark, but he's got to get back to the supernova he recently was as a three-point shooter.

In the immortal words of the great Bill Schonely, "Nobody said it was gonna be easy." Blazer fans, it's time to root and root hard! Beat L.A.! The game starts at 5:30 or shortly thereafter.