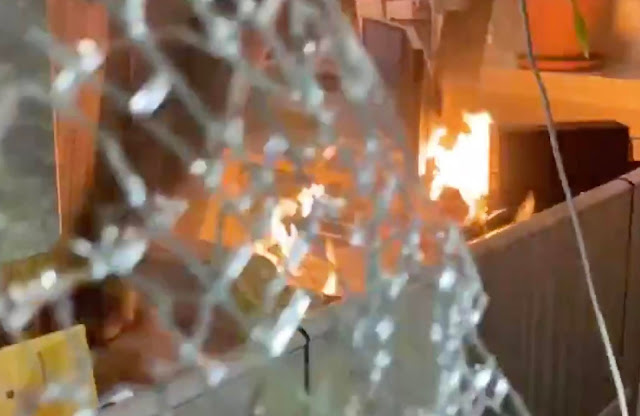 The tomfoolery known as the Portland Protests repeated itself last night. Just after dark, the 200 or so usual suspects paraded from Colonel Summers Park in the Buckman neighborhood to the Multnomah County administration building at Grand and Hawthorne. That location has little or nothing to do with law enforcement, but it was a convenient place for the dissidents to vent, I guess.
Along the way, marching through Ladd's Addition, they chanted. "Abolish all prisons! Burn all police precincts to the ground! Wake up, motherfuckers!" Quite a racket for the neighbors.

When they got to the county building, the protesters spray-painted the place up with their usual slogans, lit several dumpster fires, broke some windows on the ground floor, and finally threw some large flaming material through a broken window into someone's office.

This activated the sprinklers, which eventually put the indoor fires out.

But not before the Portland police showed up and did their usual, largely pointless, "bull rush" routine a couple of times. They didn't seem at all interested in arresting the arsonists; it was more about knocking protesters around.

Hey @PortlandPolice is officer 37 going to be fired from his job? Or is this not enough evidence for you? #PortlandProtesters pic.twitter.com/eyhoMDk58d

There were several other instances of this kind of conduct by the cops. It's all just a game for them, from all appearances.

What a waste of everyone's time. Nobody wound up in the hospital this round, at least. But tune in again tomorrow, you never know.

UPDATE, later that morning: I just noticed that the fundraiser for the guy who was beaten unconscious on Sunday night just passed $100,000. They were looking for a lot less than that originally.