Just another American town, on this night 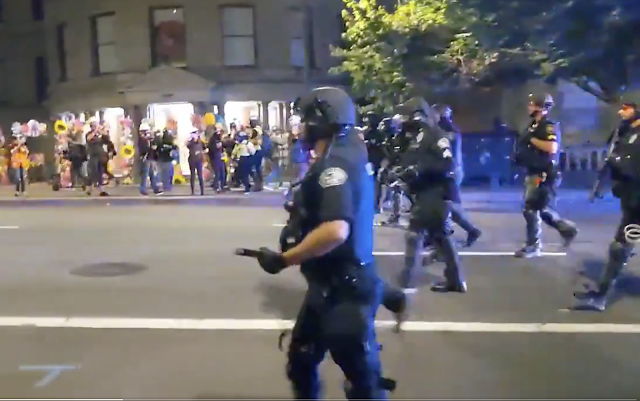 Another nightmare of a night for America. Here in Portland, we got off easy.

Yes, the protest craziness continued. There was not much new to report. The demonstrators were apparently going to act up at the juvenile detention center in the Montavilla neighborhood, but they were talked out of it. Instead, they went downtown to City Hall.

They set up a big floral display that spelled out "Defund." Then the vandals went to work with the spray paint. The glass doors on Fourth Avenue were broken, and several dissidents went inside, according to police. Later in the evening, windows were broken and someone reportedly tried to set the building on fire with some sort of flaming aerosol, according to the police.

The cops, apparently with some county sheriff's deputies in the mix, did the "bull rush" a couple of times and arrested 25 people. This is the third straight night of two dozen or so arrests. This time, they did lodge a couple of charges that may actually be prosecuted by our famous rookie district attorney. One guy is charged with shining a laser pointer at the cops, and another with burglary. Aside from that, the charges are all the usual stuff that gets ignored. Maybe attempted assault on a peace officer will get some play, so that would be three.