Juror no. 5's dog is barking 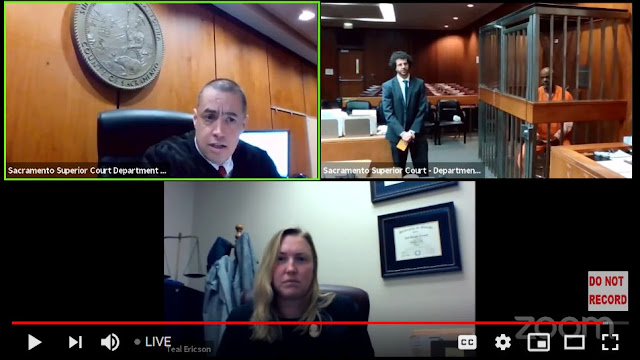 I've done jury duty a couple of times, both at the Multnomah County Courthouse. If I ever do it again, I hope it's in the new Shangri-La courthouse being built over by the Hawthorne Bridge. I'd like to go there and get a whiff of what my tax dollars built.

But only after the whole coronavirus thing has passed over. Because jury duty is mostly sitting around in a large room with a couple of hundred strangers who would rather not be there. Sort of like the audience at a high school swim meet, but without the chlorine.

In the jury waiting room, unless you have a gas mask on, you're breathing in a lot of OPP – other people's particles. And of course, that could kill you these days.

So what is the judicial system supposed to do? People who are accused of crimes are entitled to a speedy trial, and a jury trial to boot. Parties to many civil cases also have a right to a jury. It's been five months now since we wised up to the fact that we can't be that close to each other. So how should the courts operate?

Well, the obvious answer is a Zoom trial. Give the prospective jurors an iPad and an app, and take it from there. Up until now, judges have resisted going down that path, but something's got to give, and now courts are gingerly trying it.

It's like a scary science fiction short story, but it could be worse. Think about how bad this would have been if it had hit 30 or 40 years ago. Trial by phone? Trial by fax?

Anyway, remote trial-by-jury could be the next big thing. The legal community is watching closely what happens. The old-timey judges who for decades have been resisting "cameras in the courtroom" now must grapple with the fact that cameras are the courtroom. Even the U.S. Supreme Court was live streaming the audio portion of oral arguments, conducted remotely, this spring. At one point in the High Court arguments, a sound was heard that appeared to be a toilet flush.

There will be many bumps in the road, to be sure, but if we ever finally laugh off the virus, the justice system that emerges in the United States could look quite different from what it looked like six months ago.

"All rise!" And you'd better have pants on.