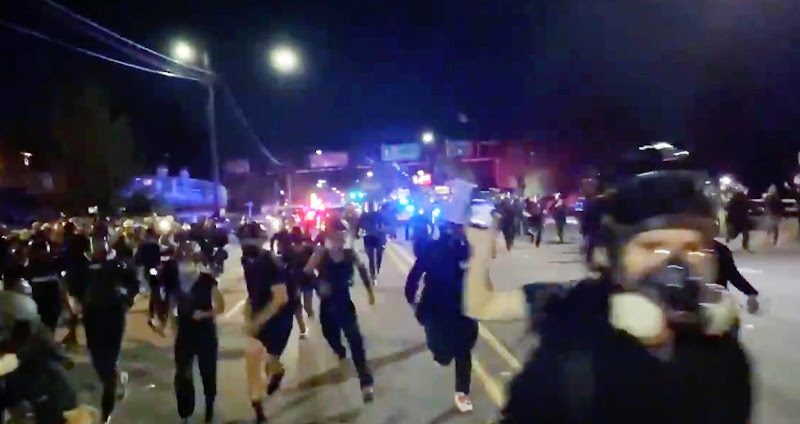 Friday was another pointless and violent night on the Portland protest front. The police got tired of defending the police union office and the North Precinct, and so they deliberately shifted the location of the showdown. But the rest was all too familiar.

The protesters, a couple of hundred strong, left Peninsula Park and were marching to their usual North/Northeast demonstration spots, when they were met by the Portland police in riot gear blocking the way. And so rather than duke it out in front of the union or the police station, the parties got into it at places like Ainsworth and Maryland, Killingsworth and Michigan, Killingsworth and Mississippi, Portland Community College, and most dangerously, on the Lombard Street overpass over Interstate 5.

By now, you know the drill. The protesters did all their usual stupid stuff: setting several wicked-looking dumpster fires, throwing paint balloons and chunks of concrete at the cops, blocking traffic. The police, for their part, "bull rushed" the crowd several times, behaving as brutally as ever to people who didn't obey their commands, or didn't do so fast enough. There was the usual knocking people over, and grabbing them by their backpacks and throwing them hard to the asphalt.

The "bull rush" act was especially frightening on that freeway overpass. You've got hundreds of people running to avoid being clubbed or knocked over, confused drivers coming on and off the freeway wondering what the heck is going on, dozens of cops in heavy gear sprinting – a real recipe for disaster. It's not one of those caged-in overpasses. There's a low rail on either side, and narrow sidewalks. I wouldn't even like walking there, alone, in the daytime.

The police's strategy of heading the bad guys off at the pass pushed a lot of protesters onto side streets in a residential neighborhood. The cops then proceeded to go nuts, with many patrol cars roaring through those blocks with their sirens blaring. If that's community policing, Chad Wolf is Mister Rogers. There was also a report of police slashing tires again, which would not surprise me, but that was hard to confirm.

It was almost as if, now that the district attorney won't prosecute protesters for crimes like disorderly conduct or interfering with police, the cops are going to impose their own form of justice right on the spot. At least there was no tear gas this time around.

One neighbor was seen sitting on the ground, his forehead bleeding. He said he had been out voicing his support for the protesters when his neighbors across the street came over and assaulted him. Spectator-on-spectator violence – that's a new one.

Four people were arrested. The cops' version is here.

If you're like me, you're tired of this show and wishing that someone would make some progress toward winding it down. But nobody is. It's a bad look for the mayor and city commissioner who are up for re-election in November. The problems are mostly not of their making, but they don't seem interested in solving them.

As for the nightly combatants, to once again paraphrase Orange Caligula, there are some very fine jackasses on both sides.