Friday protests: The good, the bad, and the ugly 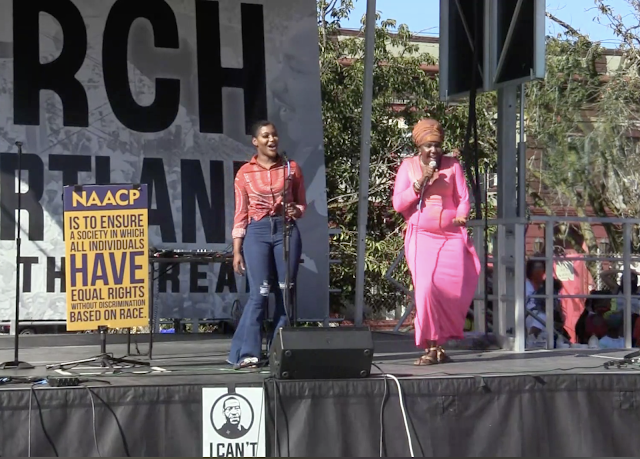 Portlandia Protestia was in full gear yesterday, with three gatherings of note.

In the afternoon, many hundreds (one estimate was more than 1,000) marched from the MLK statue at the Convention Center to Revolution Hall, chanting along the way. There were speakers and music at either end. Traffic was disrupted, but other than that, it looked peaceful. It also looked pretty cool.

In the evening, a few demonstrators occupied the lobby of the Pearl District condo building where the mayor, F. Ted Wheeler, lives. Many more demonstrators held a loud party on the street outside, also replete with live music. The neighbors were probably not amused. It didn't appear that Wheeler was home.

At midnight, a group of about 150 showed up at the police union office in North Portland and immediately commenced their usual lunacy. Graffiti, dumpster fires, then a mattress fire, then a fire right next to the building, which charred the exterior if not outright igniting it.

The police declared a "riot" and started whacking and arresting people. There were a couple of "bull rushes." Apparently a car drove through the area and its occupant fired a handgun into the air. The fire was put out before it got too far.

The police version of the early morning row is here. There is no word yet about the number arrested, or the charges.