Can the Blazers actually do this?

The Blazers meet the Lakers tonight at 6:00 in Game 2 of their best-of-seven playoff series in the NBA "bubble" at Disney World. The Blazers won the first game, 100 to 93, and they looked like the stronger team.

Then again, maybe it was just a flat night for L.A. For the Blazers to hold you to under 95, which is something Portland never does, you must be doing something wrong. 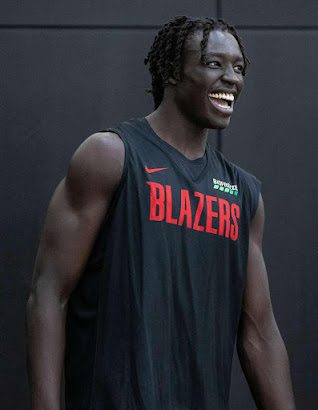 One of the many bright spots for the Blazers has been the play of a rookie forward from Sudan by way of the University of Kentucky, a fellow named Wenyen Gabriel. If you're asking "Who?," you're like I was about a week ago. But Gabriel played some nice minutes the other night, filling in for Zach Collins, who once again is riding the pines with an injury.

The Lakers may get Rajon Rondo back tonight. He has had a hand problem. Rondo could get under the skin of the Blazer guards, who are the best tandem in the world these days.

You know what I've loved? The Carmelo Anthony three-point basket with about three minutes left in the game. I've seen that a couple of times now. Boy, do the Blazers ever need those.

Having followed more seven-game series than I want to admit, I've come up with all sorts of ways of looking at a team's progress. Right now, the way I like to think of it is that the Lakers have to win 4 games out of 6 against the Blazers to advance. If Portland can take care of business tonight, that would mean the Lakers would have to take 4 out of 5.

But let's not get ahead of ourselves. Remember 2000, which is the Blazers' version of the Alamo. It's the playoffs against the Lakers. Take nothing for granted until Lillard waves goodbye to them.