Billy, a short-haired mixed-breed cat who lived with us from the time he was few weeks old, left the world suddenly the other night. He was 14 years old.

Most cats have a fair amount of personality once you get to know them, but Billy possessed an unusually large character. He was a good friend, but you always had to keep an eye on him.

His time with us began as a case of mistaken identity. We were looking for a female kitten to try to take the place of our beloved Gloria, who had died about six months earlier. Everyone thought we had brought home a girl, Lily. But as readers of the old blog may recall, within a few weeks compelling anatomical evidence emerged proving that our new addition was in fact a boy kitty. And so Lily became Billy. 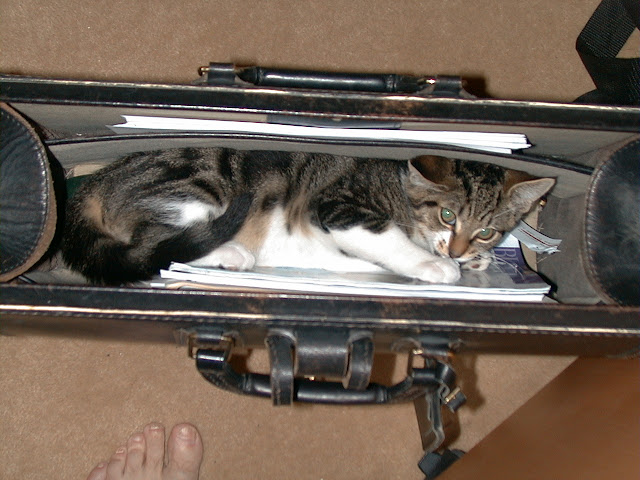 We had had a reason for not wanting a boy. We had another, older cat, Ralphie, and we didn't want two males, fearing that they wouldn't get along. And we were right about that. Old Ralphie tolerated Billy, but with zero enthusiasm. They didn't really fight much, but they didn't hit it off, either.

Young Billy was high energy. He had many juvenile exploits, but his greatest by far was his epic leap from the back of a parlor chair to the top shelf of a bookcase to attack a fish in a bowl. Everyone survived, and fortunately the humans were home to save the wet floor.

After a while, Ralph left us, and Lola, the Good Kitty, joined us. Billy and Lola lived together peacefully, although they seemed to be operating in totally different spheres. It stayed that way for the rest of their time together. Lola would step back and let her adopted brother be himself. Cats can't roll their eyes, but Lola gave off that vibe on many occasions as she observed Billy's behavior.

It was at the young adult phase that Billy became trouble. He took to spraying all around the house to mark his territory. We tried various suggested solutions to this problem, but none of them worked. The situation became a crisis one day when Billy attempted to spray a human who was seated on the toilet at the time. That was his last day of living in the house.

Banished to the front and back yards, Billy didn't seem to mind much. He could pee to his heart's content, and we humans did what we could to keep him safe and comfortable out there. Pretty soon, Lola decided that she wanted in on the outdoor action, too, and she voluntarily joined him in camping out, although she was much more wary of the situation than he was.

Out on the front porch, Billy made the acquaintance of many neighbors and other passers-by. If they didn't have a dog in tow, Billy thought nothing of sidling up to them for petting. This was amazing to us, because if we tried to pet Billy, his tolerance was minimal. More than once, he drew a little blood when one of us humans from inside the house rubbed him the wrong way, or even the right way for too long.

As best we could figure, Billy was determined to show us that he was the alpha cat of the household. For everyone else, though, he was a goodwill ambassador. Every once in a while, I'd watch in horror as some small children vigorously petted Billy for minutes on end, maybe even pulling his tail. If I tried that, I'd get a serious dose of cat scratch fever. 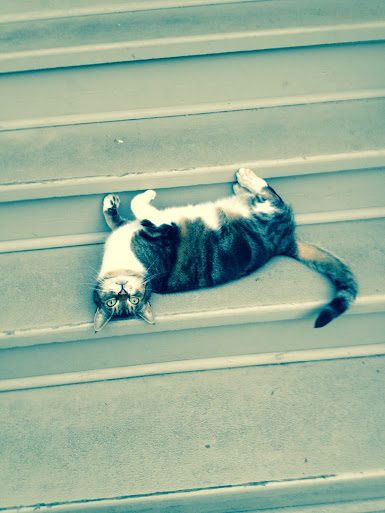 Eventually I figured out what not to do: never, ever get close to Boy Bill when he was at or near my eye level. For example, if I was on a lower step and Billy was on a higher one. Or I was at ground level and he was on a ledge. When he had us at even height, he was ready with the claws. Our next door neighbor even got gouged a little in one of those situations, while she was standing right next to me, much to my chagrin.

Then there were the trips to the vet. Now, I've never met a cat that likes to go to the vet, but Billy was an absolute terror there. From the minute he was placed into the carrier at home, his rage would grow, and by the time you got through the car ride, the waiting room, and waiting in the exam room, Bill was ready to kill. He was up on an exam table, at his exact favorite attack height. Then the rectal thermometer. OMG. They had notes on his folder to watch out.

The worst moment was always when you tried to put him back into the carrier for the ride home. That's when he'd really let loose. Once I foolishly let the vet talk me into trying to put him back in. That was a bloody lesson that I didn't need to learn a second time. On another occasion,  a vet assistant didn't heed my warning, and Billy got him, too.

One time we took the vet's suggestion and gave Billy a sedative before his appointment. It would mellow him out, they said. They didn't know Bill. He was every bit as mean as he ever was, just a drunken version. As he lashed out at everyone in sight in the exam room, he was flailing and stumbling around like a guy in a bar fight.

Then you'd get him home, and he'd act like nothing had happened. Within a couple of hours, Mr. Sunshine for the neighbors would be back in action.

The last few months of Billy's life were not his liveliest. He'd lie around just outside the doors, to make sure he didn't miss much. It was still the same character in there, just slower and weaker than you remembered. 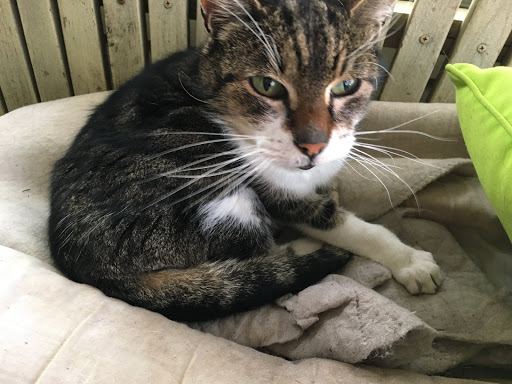 He had a good run, and his stories will be with us for a long time. But still, it hurts to see him go. Walking through those doors, without watching to make sure Billy doesn't get in the house and spray the place up – hard to believe, but it doesn't feel right.

Boy Bill, Pee Man, you were a fool. You had it made, and you blew it. But you were our fool, and we loved you. So long, buddy.