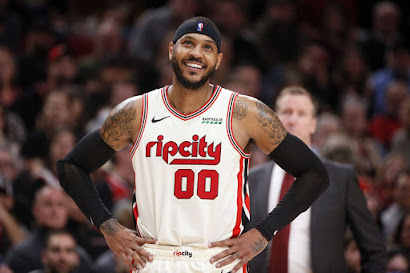 If you had told me in January that we'd be watching the start of NBA playoff basketball in mid-August, I would have looked at you funny. But here we are.

Happily, the Blazers are involved. They play the Memphis Grizzlies this morning at 11:30 or so. There are no grizzlies in Memphis, but the team started in British Columbia many moons ago.

The Blazers have one of their best lineups in years right now. A nice addition was Carmelo Anthony, of whom I never thought much. But he's contributed a lot.

Memphis has a stellar rookie in Ja Morant, but they haven't done diddly in the Orlando "bubble" in which all the "restart" games have been played. And so today should be easy for the Blazers.

You'll notice my use of the word "should." The Portland team has a way of making it interesting. They almost lost to Brooklyn the other night, which would have ended Portland's season. Brooklyn had a chance to win it at the end, and their guy actually took a pretty good shot as time expired. But the ball bounced the Blazers' way.