An arson conviction in Portland protests

There were not one but two demonstrations worthy of discussion in greater Portland yesterday, but the most unusual development of the day connected to the ongoing protests was that a "bad" protester actually got punished for something. 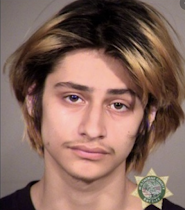 Rollin Tristan Fodor pleaded guilty to first-degree arson, a non-Measure 11 felony, in connection with the June 26 demonstration at North Precinct that also left windows smashed and graffiti sprayed on businesses in the area, some of them Black-owned....

Prosecutors said Fodor, who at the time was 17, tossed a rubber trash can atop a growing dumpster fire set on the north side of the precinct about 2:15 a.m. at Northeast Martin Luther King Jr. Boulevard and Killingsworth Street.

A second defendant, Gavoughn Streeter-Hellerich, 22, is accused of starting the blaze, court records allege. The pair did not know each other, according to prosecutors....

Fodor has been in custody since July 7 when he was arrested, records show. He will receive credit for time served in jail.

He now faces a probation violation in connection with a 2019 conviction for third-degree robbery in Washington County, according to prosecutors and court records. Fodor and two other people had tried to take another person’s iPhone outside the Washington Square Mall.

In addition to [three years'] probation, Fodor also will be required to complete 160 hours of community service and pay restitution for damages caused by the fire.

According to the news story, Portland's famous rookie district attorney has 200 more felony cases pending in connection with the protests. This is out of more than 600 arrests, including 11 last night.

Speaking of last night, the action was back down at the immigration jail in the South Waterfront (SoWhat) District. About 200 protesters acted up, throwing stuff, shining lasers at cops' faces, spraying pepper spray, and of course, lighting a fire in the street. They were met first by the Federal Protective Service, which is the security guard agency for the federal buildings, and then by Portland police. The usual "bull rush" stuff ensued. No tear gas was used this time, at least not by the Portland cops. The official police account is here.

And earlier in the evening, while there was still plenty of daylight, there was a right-winger demonstration out at Gresham City Hall, featuring some of the, shall we say, "colorful" characters who had been in downtown Portland on Saturday. Counter-protesters also showed up, and there was an hour or two of what the media types call a "tense standoff." I think the Trump types were outnumbered by the Antifa types once again.

Several of the pro-police set were proudly wearing their guns. One of them was the guy who had pointed his revolver at protesters in Portland over the weekend. The police chief said the Portland police were looking for the guy. Well, there he was in Gresham. 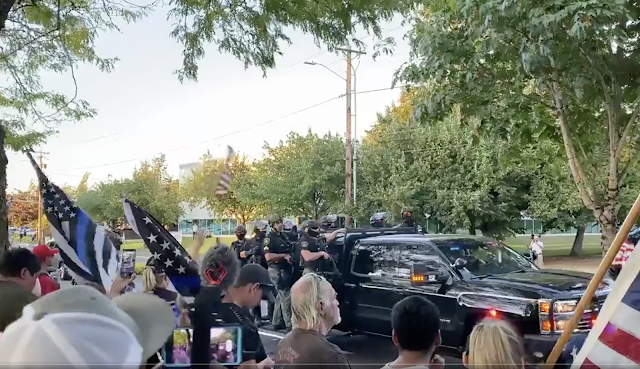 Unlike the Portland police, who let the two groups beat each other up for hours on Saturday, the Gresham cops stepped in between them to make sure nobody got hurt. As far as I could see on the internet, no one did get hurt, and there were no arrests or property damage.