When numbers get serious

Life is coming at us fast and wicked these days. So many heavy things to think about, to worry about. It's hard to know where to start.
The coronavirus, if not Topic A, is surely Topic B. It's still here. It's still just about everywhere. I hear New Zealand is off the hook for now. Good for my friends there. But they must not be able to get off their islands, or let anybody else on, and so no doubt they're still in its shadow.
I'm frightened but not surprised at how casually many people in the United States, including here in Portland, are taking it these days. Nothing's really changed from three months ago; our country is the undisputed epicenter of the pandemic. But lately people here are wearying of the lockdown and letting down their guard. Despite a great deal of magical thinking (non-thinking, really), the virus isn't giving up in the least. Warm weather isn't killing it. It's persistent as hell. And ask anyone who works in an ICU -- you do not. Want. To catch it. 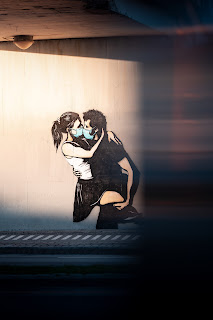 Likewise alarming, but also not surprising, is the uneven coverage into which the media has drifted. Back in April, it was all about the numbers, which seemed to me the smart way to look at this. The TV networks had the data up on the screen day and night. Today, the statistics have been pushed into the background while the talking heads blather on endlessly about the politics of it all. With hundreds of channels on the cable, you would think there would be a C-Span type outlet with nothing but the cold, dry figures. But hey, that doesn't sell testosterone-boosting pills or prescription drugs, and so it seems few in the media are still interested in the math.
Lately, they're back to color-coding things. If your state's new-case numbers are going down, you get a green. If not, you get a yellow or a red. To me, it's pretty dumb to leave matters there. New Jersey and New York may be doing better than they were two weeks ago, but that doesn't mean you want to vacation there right now, or that people there should be going back to church.
If the general direction is not a good enough guide for daily living, then what is? The numbers can tell you a lot, but there are so many statistics available. Which ones are the most important in judging how dangerous it is to do the things you used to do in your life? I'm not sensing a real consensus on that, but I have some preliminary, non-expert thoughts.
So far, there are a couple of national websites that seem reliable enough compilations of the available data, although there is always the fear that some red state bureaucrats will hide things. The helpful sites are the Johns Hopkins Covid site and another endeavor, the Covid Tracking Project. The various state governments also display numbers; all these sites are linked on the Covid Tracking Project page. Oregon's is here. What can we get from these web pages? What is it we should want?
A lot of people are focused on the number of new confirmed cases of infection, but when those numbers increase, the pat answer is that it's because of increased testing. You can focus on percentage of positive tests, but even that can be suspect, because in some places you have to be damn near dead to get a test. Availability is getting better, I hear, but testing is far from universal, and estimating the percentage of the population that's actually infected at a given point in time still seems more a guess than science.
So what other numbers are around? How about hospitalizations? Daily 10-day rolling averages, on a metropolitan area-wide basis, of hospitalizations would be interesting. Those shouldn't be skewed too much by frequency of testing, especially if they include suspected as well as confirmed cases. Presumably the number of people sick enough to need hospitalization with Covid symptoms isn't affected by how many folks we're swabbing.
If metropolitan area data can't be gathered, then county data would be my next preference, and if all else fails, statewide numbers. But let's face it, New York City and Poughkeepsie are two different worlds (as are Jersey City and Cape May), and so if state-level data is all you have, it may not be worth much. At least here in Oregon, the vast majority of the cases are in the Portland area, and so for Portlanders, statewide numbers aren't as weak as they would probably be in another part of the state.
After hospitalizations, the next figures I'd focus on are intensive-care-unit patients, again looking at a daily 10-day rolling average in the metro area. And a third set of numbers would be the same average of deaths.
Another key question in some parts of the world is availability of hospital beds. At current infection levels, Oregon doesn't seem to have a capacity problem, either with regard to plain vanilla hospital beds or with regard to ICU beds. But in places like Arizona or Mississippi, it sounds like that could be a real issue.
So, are the numbers I want posted somewhere? Not all of them, but some revealing figures are. Here in Oregon, you can get, from the state government, daily statewide figures for hospitalizations, ICU patients, and deaths. No metropolitan area tallies, though, and as far as counties go, all I can seem to find are new-case numbers. (And our neighbors up in the 'Couv are not included.)
I killed some time tonight fiddling with the Oregon numbers. As of Friday, we had 133 suspected or confirmed Covid cases admitted to our hospitals, with 47 of those people in ICUs. Since May 15, the high and low daily hospitalizations were 102 and 161, and the high and low daily ICU patients were 27 and 48. So we're not making much headway on hospitalizations, and we're doing poorly on ICU patients.
Also as of Friday, the 10-day rolling averages were 124.8 hospitalizations and 38.3 ICU patients. The ICU average is troublesome, in that the Wednesday before last, it was only 33.1.
On average, 1.9 people a day died of the virus in Oregon over the 10 days ended yesterday. At the start of the month, that average was 0.7 people a day. (Click on this image to see a clearer version.) 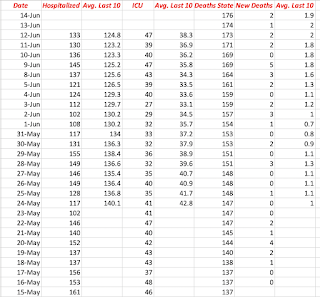 Stats are fascinating, but remember why we're looking at them: to answer questions like, Is it safe to go to a restaurant in Bend or Lake Oswego? I don't know, but it doesn't seem any safer than it was a couple of weeks ago.
That's as far as I can get on this. I hope readers will help me out. Is there some way to make the daily number of new cases more meaningful, given that it rises and falls with the number of tests administered? And are there other websites that can be mined for good data?
* * * * *
There's one other number that nobody's compiling, and we should be. This number differs with each person. I'll call it your Covid give-a-damn rating, or CGD rating for short.
This represents, on a scale of 1 to 10, how much you are protecting yourself, and how much you're protecting everyone else (including the poor folks risking their lives working in the ambulances and hospitals). A 10 rating means being meticulously careful morning, noon, and night. A 0 rating is not giving a damn at all.
To arrive at your CGD rating, take the average of your two ratings, protecting self and protecting others. Now, it seems to me the only real difference between protecting yourself and protecting others is wearing a mask when you're outside your home or car.  But if you can think of other differences, take them into account in figuring your rating.
Overall, at the moment, I'd give Portlanders a CGD rating of about 7 in protecting themselves (because people are still staying home a lot), and about 3 in protecting others (because they're not doing the mask thing hardly at all), for an overall CGD rating of 5.
Pretty anemic, but it could be worse. I turned on the tube yesterday afternoon and was aghast to see a tennis tournament being played in Belgrade, with top players and a full stadium. Thousands of people, with no precautions of any kind. The Serbians get a CGD rating of 0.
What's your CGD rating, and why?
Labels: City of Portland Health Oregon