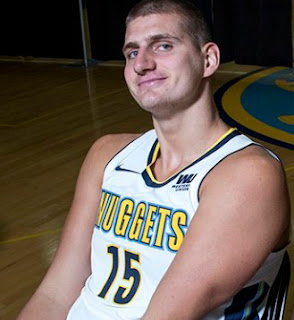 From a gambler's perspective, I need a team from the Pacific Division to win the American pro basketball championship. I have had two bucks riding on it since January! And so the departure of the L.A. Clippers, who gave away a 3-to-1 series lead and blew three straight games to the Denver Nuggets, hurts my chances of cashing in.

But other than that, I can't say I feel badly about the Clips' devastating collapse.

I don't like Kawhi Leonard. I don't like Paul George. About the only one on the L.A. side I feel sorry for is the coach, Doc Rivers, who has now blown three 3-to-1 leads in playoff series in his career. Doc's a great man on many levels, but somehow he falters in those situations.

The Clippers shot terribly (34 for 90), but even if their bombs had fallen, they were outplayed. This kid Nikola Jokić on Denver is something else. A huge man who can shoot long-range, direct his teammates like a point guard, and pass like nobody's business. With him on the floor, everyone else on the squad is at his best. The Joker had 16 points, 13 assists, and 22 rebounds. His partner in crime, Jamal Murray, scored 40 points. It was a thing of beauty to behold.

Also contributing for Denver was former Trail Blazer Mason Plumlee, the backup center. When Jokić gets what little rest he's allowed, Plumlee does okay in there. Interestingly, two other backup big men who are still in the playoffs, Enes Kanter (Boston) and Meyers Leonard (Miami), are also ex-Blazers.

When the Nugs went down 3-to-1, everybody counted them out. On the telecast of the Laker game a few nights ago, commentator Jeff Van Gundy was wondering aloud how the Lakers would match up against the Clippers. When called out for making an assumption, he confessed that he had forgotten that Denver still had a chance.

He will remember now.

The Lakers, who dispatched the Blazers in the first round, crank it up against Denver starting on Friday. I don't think the Lakers will have much trouble with the Joker and Jamal. But you never know. That's why they play the games. Just ask Kawhi.